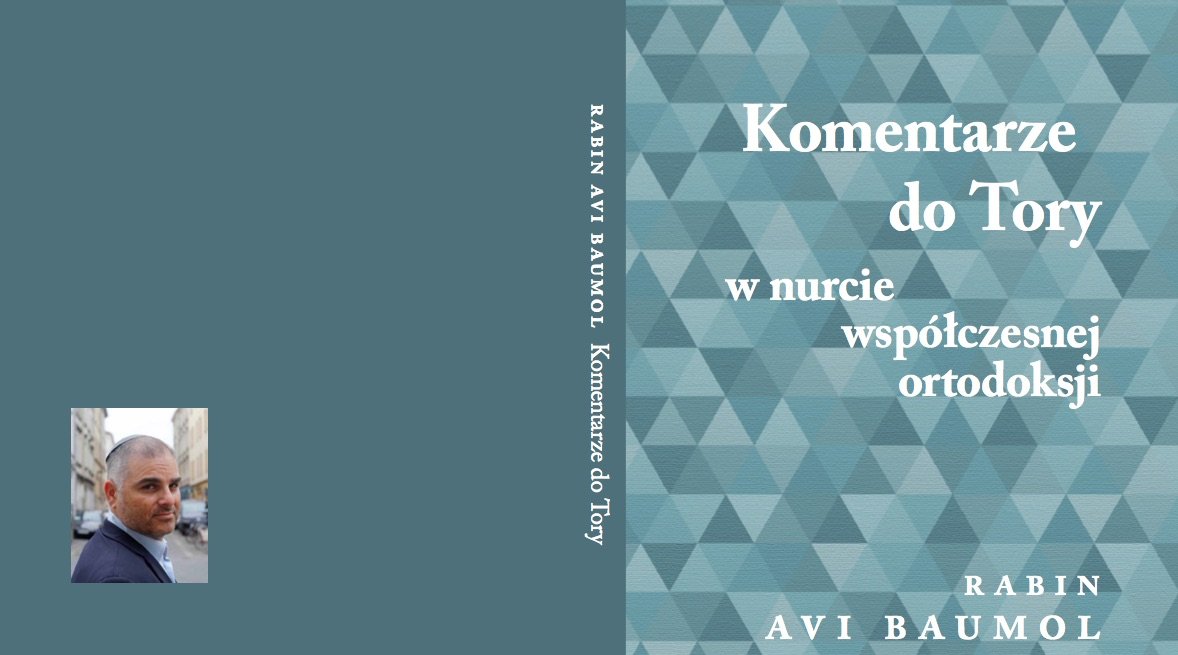 A new book of commentaries on the Torah portion of the week – in Polish – will be published in the coming weeks. The book, which was sent to the printer just a few days ago, is a compilation of Rabbi Avi Baumol’s weekly columns and was made possible with the support of Shavei Israel.

Rabbi Baumol is Shavei Israel’s emissary to the Jewish community of Krakow, and Bogna Skoczylas, a student sponsored by Shavei Israel, translated Rabbi Baumol’s writing from English into fluent Polish each week. In addition, Shavei Israel Chairman Michael Freund wrote the Foreword to “Komentarze do Tory,” as the book is called in Polish.

Rabbi Baumol’s writing “has been a Shavei initiative over the past years. Without Shavei, there would be no book and no addition to Jewish scholarship in Poland,” Rabbi Baumol says.

The book is being published by the Austeria publishing house, which was established in 2003 in the historic Jewish Kazimierz district of Krakow to focus on the publication of works related to Jewish culture. Its 150 titles include reprints of Isaak Cylkow’s original translation of the Bible into Polish, and other Portion of the Week compilations from Stanislaw Karjewski, Konstanty Gebert and Rabbi Boaz Pash (himself a former Shavei Israel emissary to Poland).

There will be a book launch for the new “Komentarze do Tory” in Poland closer to the publication date. Rabbi Baumol plans on publishing an English-language version of the book by the end of 2017.

In the meantime, we have Michael Freund’s complete Foreword in English:

Just over seven decades have passed since the inferno that consumed much of European Jewry, leaving behind a mere remnant of a world that is no more. Streets that once teemed with Jews fell silent, synagogues and religious schools became deserted, and any possibility that Jewish thought and creativity might once again flourish on the continent appeared to have been dashed forever.

But the Jewish people are resilient, refusing to yield even in the wake of a blow as grievous and devastating as the Holocaust. Barely three years after the Germans and their collaborators had murdered six million innocent Jewish men, women, and children, the Jewish people crawled out of the ovens of Europe and built the State of Israel, reclaiming their ancestral patrimony after 1900 years of exile and persecution.

In doing so, they demonstrated that no power on earth, not even the most fiendish of our tormentors, can ever obliterate the collective Jewish spirit, which is as indomitable as it is indestructible.

In recent decades, amid the rubble of Communism in eastern Europe, this hardiness has once again been on display, as growing numbers of young people, especially in Poland, have begun to rediscover and reclaim their Jewish roots. Against all odds, the sounds of Sabbath hymns can once again be heard wafting through the streets of the Kazimierz district of Krakow, the weekly Torah portion is chanted in Lodz and tractates of Talmud are being studied in the heart of Warsaw.

Much of this is thanks to the untiring efforts of Poland’s spirited Chief Rabbi, Rabbi Michael Schudrich, who has devoted his life to reenergizing Polish Jewry. Just when it seemed that all was nearly lost, Rabbi Schudrich went where few were willing to go and literally changed the course of Jewish history in Poland from a trajectory of certain demise to one of cautious hope for the future.

For more than a decade, Shavei Israel, the organization I chair, has partnered with Rabbi Schudrich in this endeavor, sending rabbinical emissaries to Poland, organizing seminars for Poles with Jewish ancestry to learn more about their heritage and bringing groups of young Polish Jews to Israel.

We do so because we believe the Jewish people have a historical, moral and religious responsibility to reach out to our brethren and assist them, wherever they may be.

For nearly four years, Rabbi Avi Baumol has served as Shavei Israel’s emissary to Krakow and Rabbinic Representative of Poland’s Chief Rabbi to the city. A dynamic scholar with an infectious love for Torah, he is based at the JCC of Krakow, which also supports his work and provides a warm and welcoming Jewish environment for young and old alike. Under the leadership of Jonathan Ornstein, the JCC has become the predominant address in Krakow for anyone looking to explore their heritage.

Each week, Rabbi Baumol writes a short commentary on the weekly Torah portion in which he combines his keen eye for textual analysis with his gift for elucidating even the most challenging of topics, never failing to demonstrate just how relevant the ancient can be to modernity.

This book, a collection of Rabbi Baumol’s essays, is remarkable not only for the insights it provides but also for what it symbolizes – namely, that Torah study has returned to Krakow. 70 or 50 or even 30 years ago, would anyone have dared to dream that such a thing could ever come to pass?

Make no mistake. No one is under any illusions that Polish Jewry will ever return to its pre-war glory. But that is not the point.

The very fact that there is a rabbi in Krakow who is teaching and explicating Torah, and that there are growing numbers of young Polish Jews who are joining the ranks of his students, should fill us all with a sense of awe at the power of Jewish history and the pull of Jewish destiny.

After all, where Hitler and his minions once sought to snuff out the Jewish spark, the embers of Jewish identity are once again aglow, generating light, producing vitality and inspiring another generation to embrace the faith of their forefathers.

In a place where so much death and destruction was inflicted on the Jewish people, the best possible revenge is to strengthen Jewish life, to underline the eternity of Israel, its values and beliefs.

At Shavei Israel, we are proud of Rabbi Baumol, his accomplishments and the lives he has touched. Studying this book each week with the Torah portion will give you a glimpse into the enormity of his soul.

But no less important, it will serve as a continual reminder of King David’s timeless words (2 Samuel 7:23): “And who is like Your people, like Israel, the one nation on earth whom G-d went to redeem to be His people.”

Through the merit of reaching out to young Poles with Jewish roots and reconnecting them with our people and our Land, may we soon witness the entire Jewish people reunited together as one in Zion.