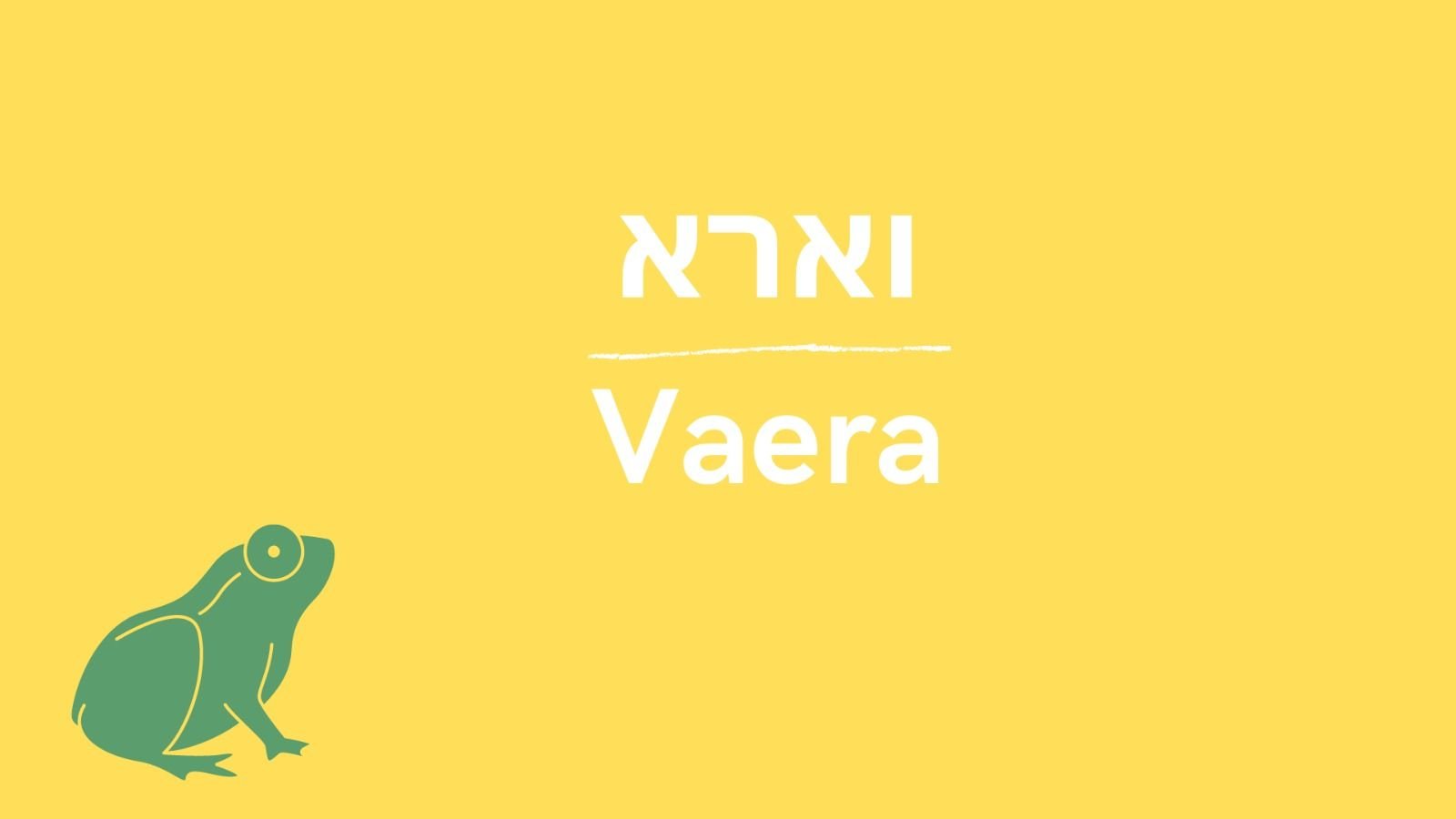 Parshat Vaera is the transition from Divine promises to Divine action. After Paro’s first refusal at the end of last week’s Parsha, G-d assures Moshe that He will release the Jewish people from slavery and bring them to the land of Israel. After Moshe’s reluctance, Moshe and Aharon are sent to Paro. The first seven plagues occur: blood, frogs, lice, wild animals, animal disease, boils, hail. Paro responds in fits and starts, at times acquiescing then changing his mind.

1st Aliya (6:2-13) G-d responds firmly and definitively to the seeming futility of Moshe’s approach to Paro at the end of last week’s Parsha. I am G-d, a name unknown to the Avot. I promised to them the land of Israel. I heard the people’s cries. And I remember the covenant. So tell the people: I, G-d, am taking them out, saving them, redeeming them, bringing them to Me, bringing them to the Land. The people cannot hear due to their burdens. G-d tells Moshe to go to Paro. He objects: the people didn’t hear me, how will Paro?

In this aliya, G-d establishes the most fundamental of Jewish beliefs. Up until now, we know G-d as Creator. And Judge (for those who sin – Cain, the flood, Sodom). As One who Promises to Avraham. But His actions in human activity have been viewed only from a distance. The promise of the land has not been granted. Even Yosef interprets his life as G-d wanting to save the Jewish people in the famine – but that is his surmising, peering for G-d behind human activity.

And in the plagues themselves, He says what He is going to do. And then does it immediately. That is why there are 10 plagues. He wants to demonstrate over and over that He is controlling the world and hence also, human history.

2nd Aliya (6:14-29) The lineage of Reuven, Shimon, and Levi is outlined. Including the birth of Moshe and Aharon. These are the Aharon and Moshe who G-d commanded to go to Paro. The ones who speak with Paro.

3rd Aliya (6:30-7:7) G-d tells Moshe to go to Paro. Moshe objects: I am tongue-tied, how will Paro listen? G-d tells Moshe: I am making you Paro’s judge, Aharon, your mouthpiece. I will harden Paro’s heart. He will not listen to you.

Here the detail of what will transpire begins. By normal political measures, Moshe knows he will not be successful. He, weak. Paro, powerful. But, he is told that he and Paro are but pawns in the Hand of G-d.

4th Aliya (7:8-8:6) The plagues begin. Go to Paro in the morning when he goes to the river. In this, you will know that I am G-d. The water will turn to blood. Moshe warns Paro. Aharon hits the water; it turns to blood. The sorcerers do it. Paro does not listen. The 2nd plague: come to Paro and tell him G-d says to let the people go and serve him. If not, frogs will invade your home, bed, ovens, slaves’ homes. Aharon raises his staff and the frogs invade. Paro calls Moshe and requests he pray for this to stop.

And the plagues will start low and ascend. What is lower than ground level? Water, which gathers on lower ground. The first 2 plagues are from the water. 4 and 5, wild animals and animal disease are on the land. And 7, 8, 9, hail, locust swarm, and darkness are from the sky.

5th Aliya (8:7-8:18) Moshe prays, the frogs stop, Paro reneges. 3rd plague: Aharon raises his staff; lice invade man and beast. The sorcerers unsuccessfully try to imitate; it is the hand of G-d. Paro does not listen. The 4th plague: Go to Paro in the morning when he goes to the river. Tell him: there will be wild beasts in Egypt but not in Goshen. In this, you will know that I am G-d in the midst of the land.

Whoever decided where an Aliyah ends was commenting by that choice. In our Parsha, it would make sense to have aliyot end nice and cleanly with the end of one plague – at the paragraph break. But both this aliya and the next conclude similarly: so you will know that I am G-d.

These are the 3 pillars of Jewish belief. There is a G-d. He is our G-d, meaning, involved in the world. And He is One.

6th Aliya (8:19-9:16) The plague of beasts happens. Paro agrees to allow the people to leave to celebrate in the desert. Moshe prays for a cessation of the plague. Paro changes his mind. The 5th plague: Come to Paro, the animals will be smitten with disease, though not those of the Jewish people. Paro checked, saw that it was true. But hardened his heart. The 6th plague: Moshe, throw dust in the sky in front of Paro. It became boils and blisters on animals and people. G-d hardened Paro’s heart. 7th plague: Moshe, go to Paro in the morning. With this plague, you will know that there is none like Me.

Plagues 4 and 5, wild animals and animal disease attack only the Egyptians, not in Goshen. This is to teach that G-d is involved in the activity of man, distinguishing between evil and good.

Turning water to blood was an attack on the Egyptian god; hence you know that I am G-d. Here the attack on only Egypt is to teach: I am G-d working in the midst of the land. And the last plagues come from the sky – He controls the sky, the powers, the cosmos. None but Him.

7th Aliya (9:17-35) Hail will rain down and kill all in its path. Moshe raised his staff and hail rained down amidst thunder, with fire. Paro called Moshe and Aharon: I have sinned; G-d is righteous. Pray to remove this and I will let you go. Moshe did so. Paro refused to send the people out.

While the plagues have a very clear order, Paro’s reactions do not. He softens, allowing them to leave to celebrate. Then changes his mind. Here, he agrees that he has sinned. This is a very impressive acceptance of responsibility. We would call it teshuva. He is contrite. And then changes his mind.

While this demonstration of G-d’s involvement in the world is unprecedented, man nonetheless remains stubborn.

The Parsha ends after the 7 plagues. The last 3 will be in next week’s Parsha. The drama of the Exodus from Egypt spans 3 Parshiot: Vaera, Bo, and Beshalach.

This story is the most noted in Jewish life. Daily mention in our prayers. In the Shema. In Birkat Hamazon. Mentioned in Kiddush. And the seder. Because it represents a radical innovation in religious belief. G-d as Creator is a core belief. G-d as Judge, rewarding, and punishing is a core belief. But the notion that G-d intervenes in the world, in shaping human history, in drawing the Jewish people to Him, to bring us to the land of Israel – the G-d of history is introduced here. We are spoiled in our time, as we see the G-d of history in our return to the land of Israel. Thus it is self-evident. We see it with our own eyes. The G-d of history is introduced to us here in our Parsha.