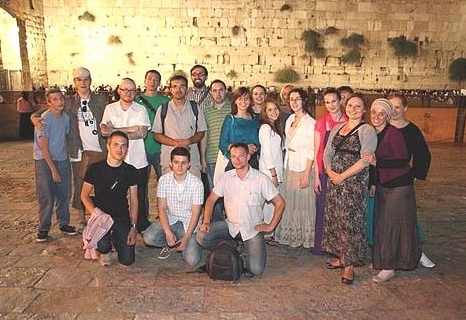 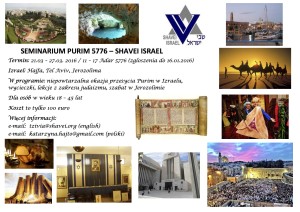 Daniel grew up with just his mother in Lublin, Poland. When he was a teenager, his mother revealed to Daniel that his father was Jewish. “But the subject was a taboo,” Daniel says, and so he never discussed it further nor pursued his Jewish roots until his father passed away. Now 45-years-old, Daniel is on his way to Israel.

Katarzyna always believed her entire extended family had been murdered in the Holocaust. Then she discovered some previously unknown relatives in Warsaw, Krakow and even faraway Los Angeles, launching her own journey to recover her past. She’s on her way to Israel too.

Paulina’s grandfather was Jewish but scrupulously hid this from everyone around him. When he died, Paulina’s grandmother shared with her granddaughter the family secret. Paulina is coming to Israel.

Mateusz grew up in Krakow, never meeting his Jewish grandfather who abandoned the family for safe haven, first in Argentina and later in Israel. Now Mateusz is heading to the Holy Land hoping to find some answers about his own hidden Jewish roots.

Malgorzata was curious why, growing up, her house had so many Jewish books. Her family also attended synagogue in Krakow from time to time. And yet, amazingly, it never occurred to her that she might be Jewish herself until her mother told her. She was already 13-years-old. Malgorzata is on her way to Israel.

Daniel, Katarzyna, Paulina, Mateusz and Malgorzata are just five of the 15 participants who are joining Shavei Israel’s first ever Purim tour of the Holy Land in March.

Shavei Israel has for many years run an annual two-week seminar for the “Hidden Jews” of Poland during the summer. This year, Purim overlaps with Easter and many Polish Jews have extra time off. Shavei Israel Chairman Michael Freund realized it would be the perfect opportunity to schedule a quick one-week trip to Israel for the community – and to provide an entirely different Israel experience.

Purim is perhaps the most festive of Jewish holidays. The entire nation dresses up in costume, the Megilla (Book of Esther) is read in synagogue while revelers whirl noisy groggers to blot out the name of the wicked Haman, and parties are held in every community – secular, religious and everything in between.

Indeed, Shavei Israel’s new Polish Purim tour will introduce participants to not one but two Purims. That’s because, according to Jewish tradition, formerly walled cities such as Jerusalem and Safed celebrate “Shushan Purim” a day later than the rest of the country. So the Polish Jewish visitors will celebrate Purim first in Tel Aviv, then take the bus to Jerusalem and do it all over again!

While the timing for the new Purim seminar may generate more merriment than usual, there will still be the classic Shavei Israel mix of touring, classes and Shabbat hospitality that have made the summer seminar so popular. The group will visit Haifa, Rosh Hanikra and Acre before spending Purim with Chabad in Tel Aviv and at the Great Synagogue in Jerusalem. Shabbat will be in Jerusalem, as well, with Friday night meals at the homes of local rabbis, lunch together as a group, and the traditional third meal held at the Western Wall.

The trip will be led by Shavei Israel’s former emissary to Poland Rabbi Yitzchak Rapoport, who is also a licensed tour guide in Israel. Kasia (Yael) Hatjo, who just two weeks ago completed her formal return to Judaism, will handle logistics and counseling duties for the group.

Shavei Israel trips for young Polish Jews are heavily subsidized: participants pay only a symbolic fee of 100 euros plus airfare. If you’d like to help Daniel, Katarzyna, Paulina, Mateusz, Malgorzata and their friends have the best Purim – no, make that Purims – of their lives, please visit this page to make a donation.