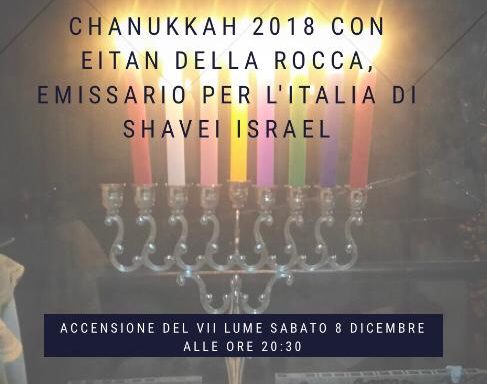 Jews of Cagliari, the capital of the island of Sardinia southwest of Italy, have a rich and ancient history that dates back to the era of the Roman empire. Since then, the community survived times of prosperity and decline until it ceased to exist as a result of the infamous edict of expulsion of Jews; and then revived despite all the persecution and challenges. The upcoming holiday of Chanukah is going to be very special indeed for the local Bnei Anousim: they are celebrating it with Eitan Della Rocca, a new Shavei Israel emissary to their region.

Eitan, originally from Rome, is currently studying in the “Collegio rabbinico italiano” institution to become a rabbi and is completing his university education in the field of psychology. He spent several years in Israel and experienced both yeshiva studies in the Yeshivat HaKotel of Jerusalem, and service in Israeli Defense Forces (IDF) in the Kfir Unit.

In the framework of his work for Shavei Israel, Eitan is going to deliver lectures on Torah and Jewish tradition, and organize activities for the Jews of Sardinia and other locations in South Italy. The first community event is planned to be a Shabbaton on the Shabbat of Chanukah that will be concluded with a special candle-lighting ceremony on the 8th of December.