The spice of life: An only-in-Israel love story 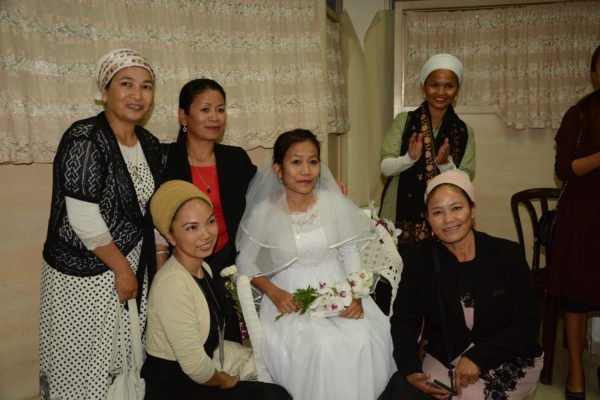 The spice of life: An only-in-Israel love story

“I lived in Florida and I ate a lot of Mexican food with jalapeno peppers. I thought I knew hot, but I never tasted anything as spicy as the ‘king pepper,’” Yitzhak Eicoff recalls.

The king pepper – also known as the “ghost pepper” for its propensity in making those eating it look like they saw a demon – is 400 times hotter than Tabasco sauce and was certified in 2007 by the Guinness Book of World Records as the world’s hottest pepper. It is grown only in India, especially in the state of Manipur, where it is a staple spice in much of the region’s traditional cooking.

Yitzhak would have had no reason in particular to encounter the king pepper for most of his nearly 50 years of life, but it now makes frequent appearances.

That’s because, in October 2016, Yitzhak married Hadassa Tungdim, a Bnei Menashe women who immigrated to Israel with Shavei Israel’s help in 2013 from Imphal, the capital city of Manipur.

“The first time I tasted Hadassa’s food, my hair nearly popped off my head,” Yitzhak jokes. “But Hadassa has had kindness towards me and she makes the food a little less spicy so I can handle it.”

Trying king peppers is not the only unexpected turn Yitzhak’s life has taken. He’d never heard nor met anyone from the Bnei Menashe community until he moved to Israel himself in 2011.

“I never would have thought I’d find my soul mate in Manipur, and Hadassa never imagined she’s meet a New Yorker in Israel,” Yitzhak says. “We had to meet half way, in G-d’s land.”

Hadassa grew up in the Indian village of Moreh, near the border with Myanmar (Burma) before relocating to Imphal, the closest “big” city” with a thriving Bnei Menashe community. Once in Israel, she lived in the north, in Migdal HaEmek, where she rented an apartment with three other Bnei Menashe young women.

Hadassa found employment at a nearby electronics assembly plant, but following a car accident in 2014 (“it was a miracle that I survived,” she says), she transitioned to childcare, where her excellent English language skills made her an in-demand nanny for local American immigrants.

Yitzhak, meanwhile, spent his first 15 months in Israel on the opposite end of the country – in the Beersheba absorption center on the edge of Israel’s southern Negev desert. He initially worked in sales and marketing before landing his current job as a loan broker, connecting small businesses with local lenders.

While Yitzhak grew up in a Jewish home, Hadassa’s family was Christian and she studied art at a Christian university in the neighboring state of Nagaland. After her first year away, she came home for summer vacation and was surprised to hear her father reciting the Friday night Kiddush – the sanctification of the wine – and HaMotzei – the blessing over bread – in Hebrew!

Hadassa’s father had read the bible every day nearly his entire life, she explains. After meeting several rabbis who were visiting India from Israel, he learned the history of the Bnei Menashe.

“He investigated the matter thoroughly and concluded that not only was Judaism the truth but that our family was part of the Bnei Menashe,” Hadassa says.

It was very strange at first, Hadassa recalls. “I had heard many languages in India, but never Hebrew,” she says. The family would walk to synagogue every Shabbat “even though we didn’t know yet what it was. The Torah talks about na’aseh v’nishmah – how, after the Exodus from Egypt, the Israelites first ‘did’ and only afterward ‘listened.’ It was the same with us. I trusted my father. If he thinks something is true, it must be.”

Hadassa was in her early 20s at the time (she is 39 today) and began taking on observance slowly. Slowly, she dropped any non-Jewish activities and work that took place on Saturday. She became a Shavei Israel Fellow, attending seminars, with the goal of teaching Judaism and Hebrew to other Bnei Menashe.

But before she could even begin her job, she got the news that would change her life again: she had been picked by Shavei Israel’s staff to make aliyah.

“It was all due to my father’s merit,” she says modestly. “He wanted to live in Israel. But he never had the chance.” Both Hadassa’s father and mother passed away from cancer. “It was his dying wish that I would move to Israel.”

Now that she has, Hadassa calls it “a dream come true, although it’s a very ‘expensive’ dream for me,” being here without her parents or any other family members. She has a younger brother still in India with whom she is very close. He goes by the nickname of Ringo, Hadassa says, “because he loves the Beatles.”

So how did our international Sally and Harry meet? Online. But not at a dating site.

They were both members of the “Keep Olim in Israel” Facebook group. When they both liked the same post, Yitzhak noticed Hadassa’s name. He was intrigued.

By this point he was familiar with the Bnei Menashe – he’d met some of the community during visits to  Hebron. So he wrote to Hadassa. After three weeks of chatting online using Facebook and WhatsApp, they decided to meet in person.

They hit it off.

“We had a mutual love of G-d and the Land of Israel,” Yitzhak says. “And we were both musicians.” Yitzhak and Hadassa play guitar (he played in bands in the U.S.) while Hadassa writes melodies and lyrics.

Eight months later, the two were united in song under the wedding chuppah as 120 guests attended, including 60 Bnei Menashe community members.

The wedding was held in Beit Shemesh – a central location that allowed Bnei Menashe to come from their communities all over the country, from Migdal HaEmek the north, from Sederot in the south and from the Jerusalem area. Thirty local yeshiva boys also “crashed” in order to say the sheva brachot during the grace after the meals following the festive dinner.

Prior to the big day, Yitzhak was initiated into Bnei Menashe tradition.

Hadassa has an “uncle” who has lived in Israel for more than 25 years (he’s not related by blood but is more of an elder in the community). If the wedding had been in India, Yitzhak would have been required to bring eight live cows to the uncle as a dowry.

Yitzhak added up the numbers.

Instead, the couple went to a toy store and bought a set of plastic farm animals to honor the custom – without breaking the bank.

“Each set also had donkeys and goats,” Yitzhak says. “We had to buy something like four packages to get to the eight cows.”

They also brought a gong (“not an Indian one, it was made in China,” Yitzhak laments) and two wraps – one for Hadassa to wear like a skirt and one for Yitzhak’s head “almost like a turban,” he says.

The uncle accepted Yitzhak’s offerings and the wedding could go ahead.

Yitzhak hasn’t visited Hadassa’s family in India yet, but he hopes to in the future. Hadassa hasn’t been back since she made aliyah either.

“For now, we are busy organizing the house,” Yitzhak says. The newlyweds are renting a modest home in a village near the city of Ariel.

There is one final Bnei Menashe custom the couple needs to do once the home is set up: that’s planting the garden…including king peppers. The Bnei Menashe import the seeds from India and grow the peppers organically in Israel, since they’re not available in stores.

“It’s the same species of pepper, but for some reason, it comes out even hotter in Israel!” Yitzhak says.

He may have to get used to Hadassa’s spicy food after all.

Here are some more photos from Hadassa and Yitzhak’s wedding: 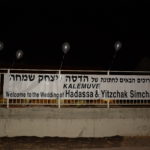 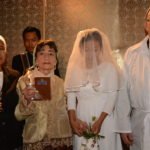 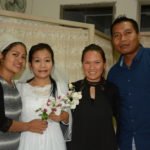 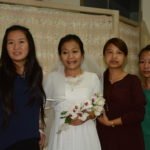 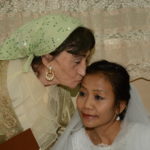